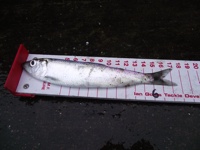 In a quest to up my species targets, I decided on a trip to Brighton Marina on Friday just gone to have a crack at crossing plaice and herring off the list.

I arrived on the east arm at about 8am to filthy weather, chucking it down with rain and just the slightest north easterly breeze. The arm was empty of people so I had the choice of where to pitch up, so I settled for bay 25 – one of my favourites.

I got setup, one rod with simple running ledger with blingy hook length to target plaice, the other rod with a small Sabiki string to get the herring.

Plaice rod was baited up with lug plus squid tipping and chucked out at distance. I then started working the sabikis but could only manage a few chucks at a time before having rest due to my back giving real grief.

I had the first herring at just after 9am which sadly, turned out to be the only one of the day. 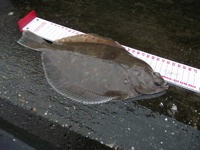 The first plaice came just after the herring, so that was both targets achieved in reasonably quick time.

The rain was relentless and a real pain in the arse, it wasn’t heavy, just that horrible persistent stuff. The breeze had started to drop had even stopped ruffling the surface of the flat calm sea.

Another two plaice were landed about an hour after the first one. It was turning into a tidy session considering i was now well into the ebbing tide and the sea was dropping quite quickly.

With no herring showing, I took the sabikis off and replaced them with a two hook flapper, baited with lug and squid. I stuck on a 2oz plain lead and chucked it as far as the floppy rod would allow. 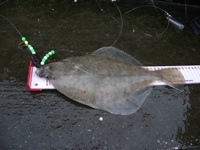 Another plaice landed which turned out to be the largest of the day at 34cm and a whisker under 1lb (13oz). It had hit both baits on the flapper and taken them well down (all had apart from one) and so was swiftly dispatched.

I was considering packing up as everything was getting soaked through and I had already accomplished what I had set out to do. I decided to stick it out anyway see how far I could go into the ebb and still nail a plaice.

At just on midday, I was slowly retrieving the flapper, hoping that the movement might trigger a response from a plaice as the static bait had long since stopped tempting them. Just few yards from the wall, the bait was nailed and soon, another plaice was landed.

It was around this time that I was joined by local guide and all round good bloke, Fishyrob. He was targetting the same as me but was going down using the artificial route to try and tempt the flatties out. By this time, we reckon they had all moved on with the dropping tide, as neither of us could manage any more.

Time was pushing on and I needed to be away sharpish – and so it was an extremely wet and happy Vic headeing off home to clean up and get ready for work. Now looking forward to the next session.