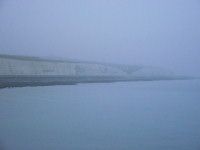 After Saturday’s enjoyable session, I decided on another daytime foray after herring and plaice at Brighton Marina. The plan was to get there early and have a few hours fishing up and over the 2.30 pm high water.

I got to the East arm at about 6.30am and while waiting waited for Frank to appear to unlock the gate, I had a look around at the conditions. The air was misty and pretty still apart from a very light Easterly breeze. The water was gin clear and calm with just the hint of surface ruffling. Looking to the cliff tops, I could see my place of work and I thought of my unlucky colleagues doing the early morning bus run while I was out here relaxing.

Being the efficient and conscientious type, it wasn’t long before he arrived and by about 7.15, I had both rods set up and was fishing.

The routine was the same as before, one rod – running ledger, long ‘blinged’ hook length with beads and shiny Tronix spinner blade ending in a size 2 Aberdeen hook baited with lugworm and squid strip to try and tempt the plaice.The second rod was equipped with a string of size 12 Sabiki’s for the herrings. 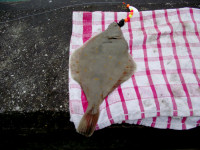 It wasn’t too long before I had the familiar tugging and wriggling of herring on the Sabiki’s and they were soon swung in and dropped into the dinner bucket. A short while later, a couple of knocks on the other rod showed that there were signs of interest in the worm bait. I left it to develop while I slugged down a cup of hot ‘mud’ coffee and then returned to it and brought in a small plaice – too small for the table, so back it went. Signs were good and I hoped for a half reasonable catch throughout the day. Unfortunately, the fish had a different plan and were not in a co-operative mood.

I was soon joined by a couple of guys from WSF, Steve and Martin aka ‘Mesito’ and ‘Bubbles’ who set up in the bays to my left. They didn’t take too long to get in amongst the fish and in the time it took me to write this, they had overtaken me in the catch rate. Another fishing nut, Steve aka ‘scottish_and_mental’, from a different forum I inhabit came over a chin wag. He was up for the day from down the foreign Western parts along with fellow fanatics, ‘DannyFisher’ and ‘Jaycee’ to try and plunder our plaice stocks.

For me, the fishing was dead slow all day, with very little activity on the worm rod and just a few herring showing to the lures. I knew I had to leave before 3pm, so that I could get home, get scrubbed up and ready for work that evening, so pressure was on to get a plaice for Anna (she doesn’t ‘do’ herrings).

Soon, the ebb current was fairly ripping through from left to right, making it difficult to hold bottom; as soon as the gear had been cast out, it was being dragged around to the right, putting a nice bend in the rod. It was in these conditions and on the last knockings, that I saw my rod being pulled along the wall. Grabbing it and lifting, I could feel that there was a fish on. To my surprise, the plaice that came up was smaller than anticipated but still big enough for the bucket – as soon as Steve sends me the photo, I’ll add it here.

Pressure was off and not long after this, I had to pack up and head for home, not really wanting to, I would have loved to have stayed through the rest of the ebb. That’s the trouble with work – it gets in the way of fishing! Anyway, not long now until we break up for Easter and the luxury of a month off.