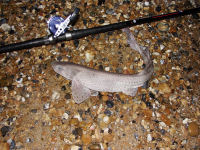 Having spent the last few sessions chasing plaice and herrings at the marina, I thought I’d have a change, so headed out to Seaford beach after work last night. Few would believe it but one of the reasons was to get a dogfish for my species list. The main reason though was to prospect for any bass that might be in, so the only bait I used was frozen launce. I had contemplated taking some worm baits but thought better of it, as it would probably have meant picking pin whiting and slugs off the hooks every five minutes – not my idea of fun!

I arrived on the beach at about 8.30pm – about three and a half hours before high water. Weather-wise, it was a very still, clear night with no wind to rough up the calm sea. After the warmth of the day, it was actually a bit chilly and I was glad of the jacket I had nearly left at home.

I used two rods with similar rigs, both using a running ledger but one was fished ‘up n over’ style for extra distance. Both rigs ended in 4/0 hooks that matched the size of the launce perfectly. So with two baits out – one at distance and one in reasonably close, I had a coffee and waited. Looking up and down the beach, I saw a few lights a bit further West by the Beachcomber, some even further West somewhere near Edinburgh Road, I guess and some East, up past the Martello end of the beach.

At about 9pm, there was a nod on the distance rod and the first fish of the night was on the shingle and one of my targets for the night, a plump doggy (lesser spotted dogfish or LSD for short) of 1lb 14oz as measured on my scales. Not long after it was released, it showed up on the shingle again; I wonder why, they nearly always seem to swim back up the beach. It was released again – this time a bit further out and as I didn’t see it again, I presume it managed to re-engage it’s satnav and find the right way to go.

While all this had been going on, I hadn’t noticed the close-in rod bouncing away merrily which, on retrieve, produced another doggy. This one was smaller and actually managed to find it’s way back into deeper water.

The next two casts on the distance rod produced two pin whiting which had somehow got themselves hooked on the big baits. It then went quiet for some time until about an hour before high water, when the close-in rod bagged another doggy, which was somewhere in between the other two size-wise.

There then followed a succession of small whiting an few pout just on high water before it went dead again. By the time 1am came around, I couldn’t stop yawning and the thought of a warm bed overpowered the thought of maybe ‘a few more casts’. I packed all the gear away and suddenly thought; I’ve only got one more week of work and then it’s a month off for the Easter break (ya just got to love working for a school) and loads of fishing to be done – woohoo!