Another early start on Friday morning in the hunt for plaice. I got to the east arm of Brighton Marina at about 7am and I have to say though, from the start, I wasn’t that hopeful. Conditions had changed to a South West breeze ruffling up the water a bit that still remained clear. The tides Weren’t ideal and I would be fishing down to the 11.40am low water and some of the flood but missing the 6pm high water due to work. The temperature had dropped a bit too making it a bit chilly throughout the session.

AS I pitched up at my chosen spot, another WSF nut, Martin (Bubbles) slotted into the bay to my left and Fishyrob a couple of bays down from there. Also down for the day to do an article, were some guys from ‘Sea Angler‘ magazine.

I decided to concentrate on plaice this time, so was not going to set up a rod for herring. Main rod was rigged with an up n over ledger which allowed for better casting with a long hook length. The hook length was outfitted with some ‘bling’ beads and reflective spinner blades and ended in a size 2 hook baited with lugworm tipped with thin squid strip.

Fishing was so slow, that I ran the risk of going into a vegetative state, so despite earlier plans, I eventually broke out the herring rod and had a go just to do something active. This wasn’t any better and even though I gave it a decent go, the herrings weren’t exactly forthcoming. Meanwhile, in the next bay, Bubbles was bringing them out with alarming regularity. At one point, I accused him of having a large bucket of them down the side and he was fishing into this.

I did eventually manage three, which I donated to Dave from ‘The Tackle Box’ as he seemed to be doing a collection of them to try. After this though, I packed up the herring rod and put all my effort into plaice. 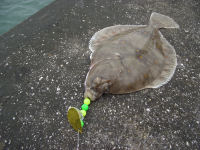 This wasn’t to last though; with time moving on and thinking about packing up to head home early, I retrieved my plaice rig only to find one of the critters had hooked up without me knowing. It was deeply hooked, taking down a couple of beads as well as the hook. I cut the line as close to the hook as I dare and released it back into the water. Deciding that that was a good time to call it a day, I packed everything up and headed off.

It will probably be a few days now before I can get out again and have to decide whether to have another session or two on the plaice or have a go at an early squid or even maybe going after bass on the beach. Decisions!