Yesterday was a tale of two two halves – crap and brilliant.

Round 1:
Up at 4am, get ready and leave the house at 4.30 to get to Brighton Marina for first light and a crack at the herring that have been showing. I arrived on the East arm at about 5am, two hours after high water, to a flat calm and clear sea, slightly overcast sky and no wind. I headed out on to the virtually empty arm to bay 32 and firstly setup a scratching rod, using a size 2, two hook flapper baited with lugworm and ragworm and cast this out about 30 yards, just to see what, if anything else was about. On each subsequent cast, I varied the distance to cover more ground.

The other rod was set up with a string of 5 size 10 Sabiki lures and a 3oz lead which I then started working. On the 3rd cast, I had a herring on, right up until it got to the wall, at which point, it flicked off the hook and was away. There were no other takes for the rest of the morning. I did have two pinwhiting on the scatcher rod while i had been working the feathers though. By 10am, it became obvious that no herring were going to show until later in the day, so I decided to head off home and return later to catch the 4pm high water. 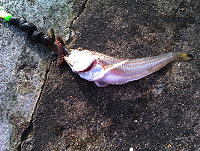 I returned to the East arm at around 2pm to find it a bit more crowded than earlier but managed to get a space at bay 35. The Easterly breeze had picked up a bit with a resultant to chop to the water surface. It was still an overcast sky with occasional breaks of sunshine. I again set up a scratching rod using the same rig and bait as before and cast that out. The herring rod was set up exactly the same as before.

I started working the lures through the water, just bouncing the lead of the sea bed in a sink and draw fashion. The current was quite strong on the run up to high water and using such a small lead, the lures were being dragged laterally at quite a rate. With so many people having lines out nearby, it beame difficult to prevent manoevre through them, so decided to quit for a while until the current died down a bit.

Anna and Alex had by now turned up for a flying visit after doing the shops in the marina. While Anna and I chatted, Alex spent time exploring but failed the “sit quietly, watch the rod and see if the end moves” test but he did manage two retrieves of the feathers before declaring enough. While there, they witnessed my one and only catch on the scratching rod – my first weever of the year, that had taken a worm bait that was bigger than itself. As I’m awaiting delivery of a new camera due to the demise of my old one, Anna managed a quick photo on her HTC phone. 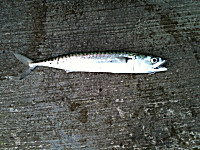 After they left, I had another go at the feathers and found that the current had eased a bit and working the lures was a bit less troublesome. Just to make sure, I brought in the scratching rod – it wan’t exactly doing much good out there anyway – and packed it away. It was about half an hour after high water when the herring appeared, my first of the year was a safely landed double shot. It was then a steady trickle of ones and twos until about 5.30, when it went a bit hectic with a few more landed, along with a solitary mackerel in amongst them. Most were caught only a few yards out from the wall, while a few were out at about fifty yards or so. I did get a couple of pictures but had to use the iphone camera, so not brilliant. By 6pm, it was over and they departed as quickly as they came and in that time, I had managed just shy of two dozen herring and the mackerel – a nice few suppers and lunches shared out.

So after a disappointing morning to a fantastic afternoon, some nice fish and a great day out. Managed it all while wearing ‘normal’ clothes, got a bit of a red head from the sun – summer is on it’s way.