Yesterday evening, after work, I met up with a Nigel, a guy visiting from sunny Devon and a member of another site I visit – South Devon Fishing. We had initially planned to fish Brighton Marina but the wind conditions at the time put paid to that, so to plan B, we decided to fish Brighton beach, just West of the Banjo Groyne. We got onto the deserted beach at about 8.30 pm to a brisk South Westerly breeze and a nice lumpy, coloured sea, lovely looking conditions for bassing.

I setup the bass rod with a long link running ledger ending in a 4/0 pennel baited with launce to start with. After the first cast, it became apparent that weed could be a problem, as it was soon clogging up the line and tackle and I ended up having to bring in the baits at frequent intervals to clear the line. Nigel had setup his rods with flappers and vaious combinations of baits and was soon in the water.

Nigel was first in with the fish when he landed a small thornback – and no matter what he tries to tell anyone, that is not a size 47 wellie, it is my rather demure and delicate size 11! I do like these little rays but they can be a pest at times and I do wish we got them in the larger size off the shore around here.

I had just re-baited the bass rod with squid and cast out and was in the process of tackling up my second rod, when I heard the ratchet on my reel go briefly and thought it was another clump of weed pulling line off in the waves, so let it go. It then went again and I noticed my line was way off to the left – big weed! 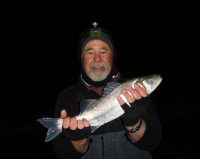 It wasn’t until I started to retrieve that I could feel the definite kick of a fish on the other end. I carefully brought it in through the waves and up onto the shingle where I found a lovely small bass of a measured 47cm and around 2½lbs. A nice and promising start to the evening, just needed to get its big brother now. 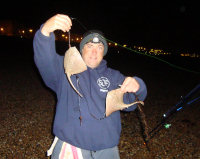 Nigel was soon in again with another small thornie. He had told me that he had spent six? sessions in his native homeland trying for a thornie and had finally managed his quest. He then comes up here and they come along like buses. I know, I know they’re small and I hear you say that they’re not real thornies but it’s all we can manage in these ray deprived parts. Anyway, he then started to show off his ray catching prowess by landing a double shot of the little critters. Honestly, there was no way of stopping the guy. I thought I was going to spend the entire night taking pictures of the damn things. 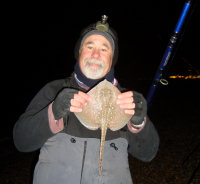 Not to be outdone, I then had one of my very own which took a crab bait out at distance. I must point out at this point that I believe mine was the biggest one of the night – Nigel may have had the edge on quantity but I defintely had the quality factor 😉

As the tide pushed up, the wind dropped completely and as a result, the sea flattened out completely with virtually no wave action. The good thing though, was that the weed had gone and gear was coming back clean. Bites also dried up and it seemed like the fish had gone too. Launce wasn’t working and neither was the squid or crab; varying distances made no impact either. 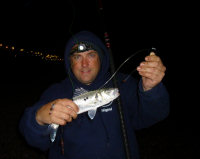 I heard a shout go up from the thornie king and saw him walk back from the waters edge clutching a fish – and it wasn’t a thornie! He’d got his own bass, although somewhat smaller than mine

A quick photo and off it went back into the oggin.

With nothing doing, I was thinking about packing up but as usual, I can never resist that ‘last cast’ and so carried on, even though my optimism levels had dropped to those of a Christmas turkey – but as they say ‘you just never know’. 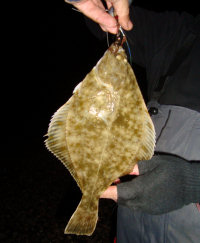 As I stood there pondering what to do, I saw a rod tip dip down – the one at distance baited with crab. I waited and it dipped again and I lifted into what felt like heavy resistance with a bit of a kick. Another thornie maybe? Anyway I dragged it into the shallows and saw a flounder – must have been a greedy bugger to take whole crab on a 3/0 I thought. It was then that I saw there was another line tangled in there, which turned out to be one of Nigel’s previously lost flapper rigs -and it one of these hooks that was in the flounder. We’ll call that one a joint effort I think.

With the tide dropping quickly and at about 3.15 we decided to jack it in for the night and head back. It wasn’t the busiest of sessions but at least there were fish and it was a great time in great company. I’m hopeful of a re-match at some time in the summer when I’ll be heading off down Devon way.