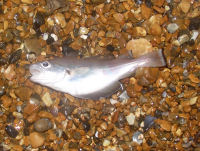 Sunday was my second session at Seaford beach this year and not expecting much, it was more about testing some rigs I’d made up using adjustable crimps by Breakaway  in place of my usual silicon stops or normal crimps (more on this at the end). It was also an opportunity to kickstart the season with maybe ticking some of the more common species off the list. Of course, I should have done this on my first session of the year but didn’t take any pictures as I knew that I’d already got them ticked off; but being a complete tosser, it wasn’t until later that I realised of course, that we are now in a new year and starting from scratch.

I got onto the beach at around 4pm to find it almost deserted apart from a few fishing just to the West of me. There was a South Westerly breeze blowing which chopped up the water nicely but wasn’t enough to churn it up properly. It did increase later on but to be honest, it didn’t have much of an effect on the rising tide. The plan of action was to fish the tide up and over the 11pm high water and maybe a couple of hours down. I was going to specifically target the dabs during the last of the daylight into darkness and then go general scratching with the chance of some lunch sized whiting.

I set up the one rod I was going to be using with a slightly adapted Wessex rig baited with lugworm tipped with thin squid strips on one hook and ragworm tipped with squid on the other. I did have some party squid too, which I also used to tip off the other baits or use on their own.

After half an hour, the first knock produced a small pout on the higher hook – so that was one of the list! It always amuses me to be taking photos of these ‘lesser’ species that you wouldn’t normally take notice of – but when it comes to species hunt type competitions (like the one being done on another site I frequent), if it ain’t on camera, it doesn’t count. 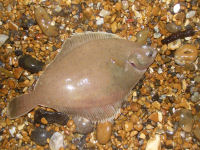 I had a few more knocks that ended with more pout but then after about forty minutes or so, I had another repeated knocking which produced a small dab. Now this was what I was hoping for, after hearing reports of some half decent dabs coming out from here, they were worth targeting, as Anna and I are quite partial to dab dinners.

It wasn’t too long before darkness crept in and the oh so predictable whiting fest started with a double shot. These were not the plump dinner sized ones I’d been having before but the more common pins which aren’t worth keeping.

In the manner of a self conscious pervert, I made sure that no-one was watching, quickly got the camera out and as fast as you like took a quick snap before setting them free. At least now, I was almost done with this chore of having to get these embarrassing photos done – all I needed to complete the set was a slug (rockling) and that would be it. 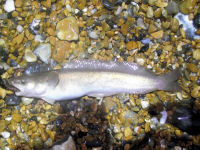 I didn’t have to wait long, as the next retrieval brought in a double shot of a slug and a whiting, so a quick photo and the task was complete. Now, I could have done this on my last session

Anyhoo… by about 9.30, I’d really had enough of dragging undersized whiting and slugs out, so decided to pack it up. At least that was four species to tick off the list.

Breakaway adjustable crimps. Excellent things that give the best of both worlds; a secure and simple way of trapping swivels on rig bodies like a normal crimp but with the advantage of being totally adjustable like a stop knot and of being allowing precise tensioning. They are identical to a normal crimp but before being used, you push a small rubber insert into it and pull it through before cutting off the excess. You then thread onto the rig body as normal and use crimping tool to squeeze down until the desired tension is reached. These little things prevent any damage being caused by pinching on the line like a normal crimp can do. Now I’ve used them, I won’t be going back to the old normal crimps or the laborious task of using the silicon tube stops.