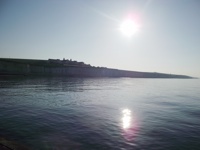 I was determined to bag some more squid, so with that in mind, I headed off to Brighton Marina on Friday morning, nice and early. Got onto the East arm at about 7am and it was virtually deserted. Absolutely beautiful morning, bright sunshine, no wind, flat calm, clear sea – perfect. I was on a dropping tide but decided to start in bay 1 with the intention of moving up to the higher numbers as the tide fell.

Standard set up of a sliding float rig with TronixPro squid jig at the end of the hook length. I plumbed the depth to make sure the jig was settling just right and then had the first proper cast of the morning – well, more of a gentle under arm lob really, putting the float out at about ten yards out. 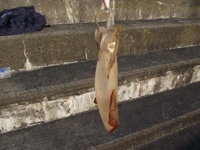 I had a quick coffee then returned to the rod to see what the drift was like. The float had come in closer, so went for another lob. As I retrieved the gear, the rod tip suddenly dipped and the line went taught. A squid had taken the jig as it was rising and was soon on the deck.

I quickly put the float back out and then tended to the catch. Same as the other day, a relatively small one compared to what I’ve normally had off the arm. Would still make a decent lunch though, so it was quickly dispatched and tucked away.

The rest of the morning was slow, I mean really slow, no more interest shown in the jig, even after having moved up to higher bays. Looked like they’d all done a runner and disappeared. I gave it until around mid day and then decided I was on to a loser for the day, plus I needed time to get cleaned up and ready for work that evening anyway, so packed it all in and headed off home.

Lovely day to be out, I just love those early mornings when it’s dead quiet before the masses turn up and you have the place to yourself and pretty much go where you want. I had thought about going today but having been to the marina on previous bank holiday Mondays, I decided I couldn’t be arsed fishing elbow to elbow with the inevitable tinsel chucking. Besides which, work beckons anyway, so it was pretty much a no go anyway.