The pursuit of squid has been a bit of a compulsion with me this year, having fished a few times and only one dropped one to show for it; so it was an early start this morning in the continuing quest. Brighton Marina was the chosen venue and as it was forecast that the wind would be from the North East, I decided that the East arm would be a good bet, fishing in the higher numbered bays on the the straight, which should offer some protection.

I arrived on the arm at about 6.15am expecting to have to wait until Frank turned up to unlock the gate – as it was, he’d obviously been suffering from insomnia, as he was already on the wall with the gate open. After the usual chin wag, I trudged off and settled in bay 48. Flat sea, only rippled by the light breeze and only slightly coloured – conditions looked good.

I set up the carp rod with a sliding 1¼oz float, plumbed the depth, then attached a pink Tronix jig to the business end and had the whole lot in the water by about 6.30. I had a quick coffee while the float was working in the slight left to right current of the ebbing tide. High tide had been at 6am and the hardest current had already petered out. 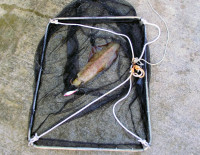 I didn’t have to wait long before I saw the float slowly disappear in the characteristic squid take. I slowly eased it towards the wall, holding the rod in my left hand while using my right to deploy the drop net (wasn’t going to make the same mistake I did last time and lost one trying to swing it in). With the net now just under the surface, I gently steered the squirting and inking beast closer and then over the frame and safely into the middle of the net – a quick heave and the critter was decked. My first of the year – woohoo! 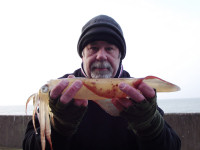 I continued to fish the current, working the float but the stiffening breeze made it difficult to control. I sent a brief text message to Frank asking about the conditions on the West arm and his reply confirmed to me that a move was probably in order. I then phoned Fishyrob who said the conditions were much better over that side with better shelter from the breeze.

I trudged back to the car and made the very short journey over to the other side of the marina and was shortly onto the West arm and into a slot next to Rob and a client (sorry, didn’t catch your name), who had already decked his first squid. Although the water was calmer over this side, there was very little in the way of movement, with the float just staying where it landed.

The fishing proved to be very slow with nothing added to my tally. Rob’s client on the other hand, decked another one while I was there, By about 11.30, I’d had enough – my back was screaming and I really needed to get home. So final result was just the one for me – but at least I’d broken my duck and my optimism has now been renewed.