Having had some success at the WSF organised event on Saturday, I returned to Brighton Marina again yesterday with squid being the target. I arrived at at around 3pm with high water expected at approximately 5pm. As before, the marina was quite crowded, so I headed out to the bays nearer the end and eventually set up in about bay 54. 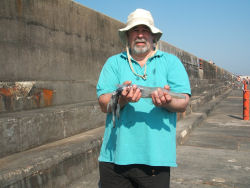 Things started slowly with no indications of activity showing. By about 4pm, I tried a tactic change and decided to bait the jig. I’d been unable to get any mackerel for bait at the ‘Tackle Box‘, so after being persuaded, I thought I’d try frozen ‘Blueys’, otherwise known as Pacific Saury which are an imported oily fish, mainly used as a food source but have found their way onto the bait market. I cut a section from the tail end of a Bluey and lashed it to the jig with bait elastic. I cast to roughly the same location as before, hoping that there were more waiting there.

I propped my rod against the wall, set the bait runner and started to get a drink when the bait runner wailed as line was pulled from the reel. While picking up the rod, I looked over the edge and saw my float disappearing. I lifted gently and began to recover some line and saw a nice squid below the surface. 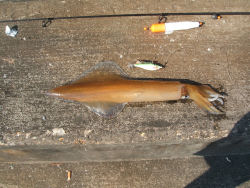 This is where I took a chance in deciding to lift the squid straight out rather than using a drop net. I pointed the rod down, wound in as much as I could until the squid was just on the surface below me and lifted in one smooth movement. Job done, one squid landed safely. It was photographed by a kind chap who was fishing just along from me. Whoever you are and if you’re reading this, many thanks.

In the next ten minutes, I had a further two squid landed, both on ‘bluey’ baited jigs just off the bottom and no more than twenty yards out from the base of the wall. Biggest of the three weighed in at 2lb 6oz. 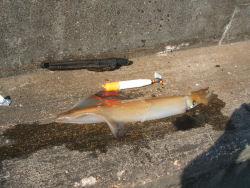 The action died after not long after these three had been caught and no more were found. I tried various tactics – baited and non-baited jigs in varying colours and sizes from the medium sized green one I’d caught the three on, to blue, orange and red, small and large. I am of the opinion that groups of squid work their way along the wall hunting their prey of prawns and small bait fish and do not remain static in one place. On my next trip, I’ll travel lighter and be more mobile while attempting to follow them along the wall and try to establish a pattern of feeding behaviour. Of course, I’ll be experimenting as I go, trying different rigs, methods and even baits, trying to gather more information on these interesting (and tasty) creatures.