Saturday 10th May was the date for ‘squid Only’ competition organised by ‘Fishyrob’ a local angling guide and member of WSF forums. The venue was to be the East arm at Brighton Marina. 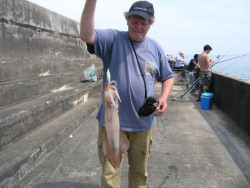 We gathered on the East arm at about 12.30pm and walked our way out onto the arm. It was packed beyond belief with nearly every bay occupied. From the antics of some, it appeared that they were only there for the mackerel.

We managed eventually to find some vacant spots near the far end from bays 40 odd up. Everyone tackled up virtually identically – light carp rods, float gear with one or more jigs.

First hit for was for Steve ‘Mesito’ who brought in a decent specimen to get the ball rolling. Things were really looking positive for the competition. Soon after, Steve landed another nice looking one. Reports came in of further squid being landed along the wall. 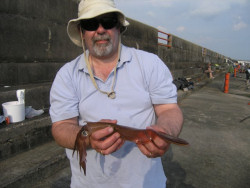 It wasn’t until sometime later, after I thought I was going to blank, that I had my one and only of the day. I had being watching my float carefully, when I noticed a small dip before it gracefully slid slowly under the surface. I wound in slowly and felt the weight at the other end of the line. as I retrieved, I was mindful of the fact that squid have a habit of escaping at the last moment. Rob leapt to my assistance and carefully landed my prize with the drop net. 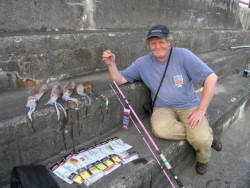 By the end of the day, most of the competition entrants had caught at least one squid. George of ‘Tronix‘ fame also had a prize Cuttlefish. It was only fitting really, as he had provided all entrants with a jig at his own cost. Steve ‘Mesito’ was the final winner with a total of five decent squid. His prize was a wonderfully vibrant pink spinning rod kindly donated by Dave Grinham of the ‘Tackle Box‘. It was a fantastic day which also resulted in Â£70 being raised for the RNLI

Full report can be read here