Well, eventually it happened, after previous postponement due to weather, the 6th. All England Squid Championship, a charity and fun day, raising funds for the R.N.L.I. got under way at Brighton Marina on Saturday 27th April. As usual, the event was organised by ‘Fishyrob’ and sponsored by George Cunningham of TronixPro. Thanks also to Dave at The Tackle Box for allowing the use of the arm for the event. I believe, in total, some sixty eight fools gathered at the East arm cafe, ready to hand over the entrance cash and draw lots as to who fished where.

In contrast to previous draws at this event, and against all the odds, I managed a low number and drew to fish at bay 4, so only a short walk away. I normally draw numbers so high, even Carol Vorderman would struggle to count that far.

And so it was I made the short distance to my slot and started tackling up – my usual set up, a 12′ 2½lbs carp rod, 5000 size bait runner reel and a simple sliding float rig with the TronixPro jig at the end of the hook length.

I was full of optimism, watching the float in anticipation just, waiting for it to gently slide under as a tentacled creature took the jig. Hmmm… the anticipation continued but not quite at the levels of earlier. The hours ticked by and it wasn’t until we were nearing the end of the competition when the first squid started coming aboard.

My high hopes and optimism were fading quicker quickly and I was staring at the prospect of a blank session. It was good to hear the shouts going up and seeing the squid coming in – at least it showed they were there – but not near my jig it would seem! 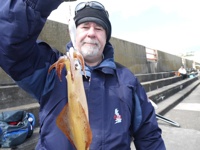 I was into the last hour when I saw the float dip slightly before disappearing – first thoughts were that I was stuck in the weed but… there were signs of life on the other end. Rob kindly began netting the beast for me. I have to say, his attempt at humour almost had me taken in with his cry of “Sorry Vic, it’s gone, dropped off”. I very nearly let out a string of obscenities but in time, I saw my catch safely in the net.

It wasn’t huge and it certainly wasn’t in with a chance of the trophy but it had saved the blanked and would be extremely tasty for lunch the following day.

It wasn’t long before the shout went up that the competition was over and we all began the packing up, clearing up and trudging off the arm. I didn’t stay for the after comp knees up but opted to get home, shower and take a rest. The standing up for that length of time certainly do my back any favours.