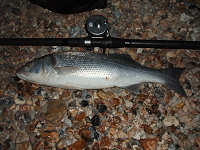 I was thinking the other day that I haven’t fished Seaford Beach since January, so decided to have a go there last night to see what’s about. Not being able to rely on catching mackerel there, I decided to continue my launce (sandeel) for bass experiment. I had some left over lugworm as well and thought I’d use that up on a scratching rig.

When I got to the beach, it was about two hours into the flood tide and I saw that there was some weed present but didn’t look too bad and was certainly fishable. The sea was pretty calm with just a small swell and a bit of movement surf-wise. There was no wind to speak of and the sky was cloudy with sun breaking through at times.

I set up the scratching rig first, a size 4, two hook flapper baited with the lugworm which I cast out about fifty yards. I then set about the bass rod which I would use later on and used a long link running ledger combined with an eight foot trace and a 4/0 pennel to be baited with the launce. These were frozen ‘Ammo’ and were a pretty good size, being about six inches in length and thick bodied. Since I started using these, I have found that the larger sized launce seem to work better than the smaller ones which have caught significantly less fish.

First fish to be landed came in about three hours after low water and it was a double shot of a school bass and a small weever. Next in was a small thornback ray, shortly followed by a small Tub gurnard – all these came in before full darkness and fell to the lugworm. Once dark, I had another hit which turned out to be another school bass.

By about 10pm and four hours into the tide, the weed started to become a problem – long strands of the ‘Spaghetti’ weed got caught up on the hook, sinker and leader knot. The best way to deal with this was to abandon the scratching rod and concentrate on the bass gear which I had by now deployed. While packing the other rod up, I heard the ratchet on the bass reel scream off as a fish took line. I picked up the rod and felt the fish pulling strongly and struck into it. A short while later, a bass of around 2½lbs was on the beach but before I could reach it, the hook fell free and the next wave took the fish back. Ah well, at least I knew there were fish  there.

I re-baited with a fresh launce and cast out again just beyond the breaking waves. Almost immediately I saw the rod lurch over and the reel sing again, I lifted into the fish which was on for a brief moment before going free – arse! Another fresh launce was cast out but nothing touched it – or so I thought. The rod was moving in a wave-weed like manner but when I retrieved it, I found a spider crab firmly attached. Unfortunately it wasn’t peeling, so went back.

By now, it was about an hour before high water and the weed was getting to be a real problem; at least on this rig, there was no leader knot to worry about as it was a straight through line. I saw the rod moving and was about to bring it in, when it dramatically arched over and the reel screamed’ I picked it up and felt a reasonable fish on the other end. As it got nearer the beach, I let the waves carry the fish closer to land and soon a nice fish was on the beach – success! It measured 52cm  and weighed in at a shade over 3lbs – not huge but very satisfying for my first session there in six months.

The weed become intolerable around high water and the place was just unfishable – huge rafts of it could be seen in the waves and after a minute in the water, line and terminal tackle were smothered and being dragged along by the weight of weed in the current. I was down to my last launce anyway, so chucked it to give the fish a free meal on me before packing up for the night.

Given that there was a nice variety of fish (although on the small side), I may give the marina a rest for a while and concentrate on Seaford a bit more along with Newhaven for the sole.