Following on from my previous entry, I met up with Bill last night at a spot just opposite west View on Seaford beach and after the initial intros, we wondered onto the beach. We were about an hour before low water and intended to fish up and over high water and maybe some down. There was a bit of a South Westerly breeze blowing and the sea surface was just chopping up

I was beginning to set up when I noticed some mackerel just off the shoreline in very shallow water, I clipped on some feathers and had a few chucks, which resulted in some nice fresh bait for the night.

My two rods were then set up for the evening – one with a size 4, two hook flapper baited with luworm and the bass rod using a long link running ledger with a 4/0 pennel baited with launce or squid. 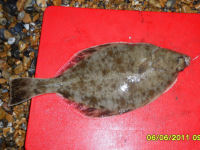 Bill was first in with a nice flounder and I followed this up with a lesser spotted dogfish which took a ledgered launce at a relatively close range. Bill then did tit-for-tat and pulled a dog of his own. Once darkness fell, bites were frequent and I was heartened when I saw a good tug on the bass rod and heard the ratchet chirp. 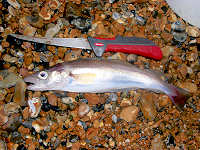 I struck into something that was very obviously not large and not exactly putting up the scrap of the century and was surprised on beaching it, to find a nice table sized whiting of all things. This was to be later joined by two more of about the same size – so that was lunch sorted then. These last two took the worm baits at about fifty yards well into the flood. 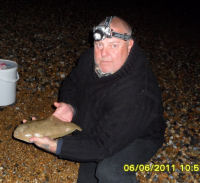 It was around this time that I saw Bill walking back from the waters edge carrying what like a nice fish. I popped over and saw him clutching a very nice sole which he told me was his first. I was really pleased for Bill, it’s always a lovely feeling to get a new species under the belt, especially a tasty one like that. The photo shows a very placid and cooperative sole but what it doesn’t tell is the story of his ‘sole juggling’ act just moments before, as the critter leapt and slid around in his hands – a very funny thing to see. Personally, I think it should be a ‘must have’ in the next series of that shite TV show otherwise known as X Factor, it would certainly be a step up entertainment wise.

My next big moment was while I knelt to retrieve some bait from the bucket and felt something give ‘down below’ – not anatomically but my jeans beginning to fall apart. As I went to stand, there was the sound of old, bait soaked, manky fabric literally giving up the ghost and as I rose to the noise of rending cloth, I could see and feel that my nether area was ripped from ‘arse to breakfast time’. I now had the pleasure of that cooling breeze blowing around the man vegetables for the rest of the night.

On the fish front, I managed a couple of schoolie bass along with a few pout that took the worm baits but nothing else bothered the bigger bass bait for the rest of the night. As it neared high water time, the bites dried up and it went completely dead, apart from Bill who managed a new one for him – a bloody rockling.

I did however manage to get myself a nice boot full of cold water while trying to get my bucket filled, so not only did I have chilly parts, I now had bloody freezing, wet foot – which was nice. I was glad when we both agreed enough was enough and decided to pack up.

So that was Seaford done on Bill’s marathon fund raising and now he’s off to Shoreham for the next leg. We had a great session, with a few species and great company, I look forward to his next visit.

Please support Bill if you can, all donations to a good cause – the RNLI. Details of his trip, along with dates and venues can be found here:
Bill’s RNLI Marathon