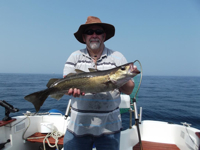 Sunday morning a couple of weeks ago, saw me down on the slipway at Newhaven, waiting for boat owner and fellow angler, Terry Hill, as we were going out on the hunt. The plan was to hit some wrecks and hopefully find some cod before heading West in search of bream.

Once supplies for the day were loaded, ‘Sea Mistress’ slipped out the port and we headed to the first mark. We stopped en route to stock up on fresh mackerel, which were duly plonked into the live bait tank.

After a not too long steaming time, Terry found one of his favourite marks and set up the drift. The rods were rigged with running ledger with a six foot hook length. Live joey mackerel were hooked and sent down to the bottom to work their magic. 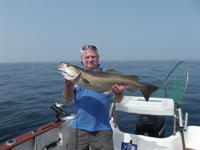 Almost immediately, something hit the bait and although there was a fish on, it could only have been small, as there was no fight. It was brought to the surfaced and I was gob smacked to see a pout fairly hooked in the mouth and no sign of the joey. The bloody pout wasn’t much bigger than the bait and had no business being there!

Anyway, a fresh joey was sent down on the next drift and both our rods arched over as the baits were hit. Two fine pollack were boated, mine going 8lbs, terry’s 13lb – a nice start.

My next catch wasn’t so good as I got got snagged in the wreck. I wrapped the braid around a stern cleat and hoped for a pull out or a break. Unfortunately, the braid slipped on the cleat, pulling the rod tip onto it and snapping it clean off… Bollax!!

Terry loaned me a rod for the rest of the trip but the words.. “you can christen this one, it’s hasn’t been used before” made me shudder… no pressure then. 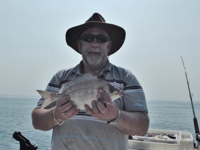 We boated a further two pollack on this wreck, both just under the double figure mark. On the way out, Terry had told me of some fish that had been lost previously on this mark, strong, fast fish that smashed tackle up. Could be big coalfish (coalie), maybe even tope or similar sharky things. I was to experience this myself when something below grabbed my live joey and took off like a bat out of hell. With the drag set as hard as I dare, the fish just stormed off and snapped the 30lb mono leader like cotton. I guess we still don’t know what the mystery fish is. 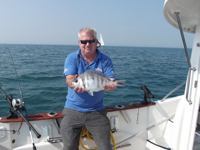 With not much else happening, we moved off West to fish Kingmere rocks, a reef just off Littlehampton known for its black bream fishing. Once there, Terry dropped anchor and started to fish. I used a two hook flapper baited with strips of cuttle and was almost immediately in to a bream, albeit a small one. Although most were small, I did manage a few keepers, while Terry had the best individual fish of the day at 2½lbs. He also bagged the one and only bass of the day.

Later in the afternoon, with the wind starting to freshen, it was decided to call it a day and head back to port. I had a fantastic day in good company and with a few fish fillets for the freezer. The only downside, was the smashed rod with a good 12-18″ lost, I don’t know what the hell I’m going to do with it – a stubby boat rod maybe. I guess it means having to go shopping for another – shame 😉

Well done Terry for putting us in the right place and many thanks for the loan of the rod.