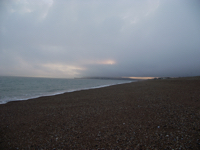 Decided to have another session at Seaford beach on Wednesday evening, to keep the momentum going in my return to shingle mania. However, there was a snag to my plan, having decided too late in the day to get any worm, I only had frozen squid available on the bait menu.

Looking out of the window, I could see it was not ideal for big bait fishing – calm with only the slightest of wavelet action. Although there a tiny band of colour in the margins, it was mainly clear. Ah, well nothing ventured, nothing gained, as they say.

I hit my preferred spot at about 8pm and having missed low water, I knew it was going to be a tough wait, to see if anything happened over high water later on.

A ledger rig was set up, baited with squid on a 5/0 and chucked out about twenty or so yards. The bait sat out there and did…. nothing, no interest at all, not even the slightest of knocks to show that small stuff was having a nibble.

While waiting, I was joined by a guy who had popped over for a look, ‘Lighthouse Si’, a fellow member of WSF and LISA . We had a good old chin wag and talked about everything fishy, locally. Once Si had departed, I set about waiting for nothing again.

Once darkness fell, I had a cunning plan and changed tactics. I removed the ledge setup and replaced it with a simple two hook flapper baited with little squid strips and hoofed it out in the hope of some small pout. While waiting, I quickly made up a simple live bait rig and once done, I waited again.

I was somewhat surprised that I wasn’t even get a hint of anything that could be used as a bait, there was just nothing at all. It was almost certain that this was going to be a blankety blank session.

At gone 1am there was suddenly movement in the rod tip and I was thinking this could just do it. When I brought the rig back in, I was disappointed to see that it had the smallest of smoothound pups dangling from it. It was at this point, knowing that the deadly blank had been avoided, I thought that home and bed were the best idea I’d had all night.