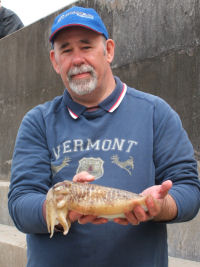 I had another early start at Brighton Marina yesterday morning in the quest for tasty Cephalopods and some practice for the upcoming 3rd All England squid Championship on the 8th of May. After a quick visit to the Tackle Box for some more leads (Cheers Eddy for opening up early), I headed over to the West arm and grabbed a spot at the ‘Float Only’ bays at the end about an hour after low water. The weather looked promising with an overcast sky, very light Southerly breeze and a flat calm and clear sea, so I was optimistic as I set up the now standard rig of float fished jigs. I bucked the trend of using pink jigs and within minutes had cast out a green Tronix jig to do it’s work in the current which was running quickly as the tide rose.

I guess it must have been around 9am when I had my first take which saw the float slide under the surface. As the creature got to the surface, it gave an almighty spurt, slipped the jig and disappeared. Buoyed up by the take, I was confident that others would follow and at about 10.30am, I had another take which saw another squid on the surface. I could see that it was comparatively small and so had no problem swinging it up without using the net. First one done, I worked the float  through the swim in the hope of a quick follow up but it all went a bit slow with only a couple of missed takes.

Danny, one of the guys from the WSF internet forums turned up about 11am for a bit of a chin wag and fishy talk of plans for the summer. My wife Anna joined us half and hour later, wanting to see how her delicious squid dishes start out and how they’re caught; it also gave us the chance to blow the cobwebs away over losing one of cats on Tuesday when he had to be put down.

Just before mid-day and the top of the tide saw the action quicken when I had a take and a squid on, it looked pretty small and I thought I’d have no problem in swinging it when, despite the kind offer from a nearby angler to net it for me. The result? bloody thing dropped just as I was beginning to lift it. The next two successive takes resulted in the squid letting go as they were about to surface. Another take and some good netting by Danny saw a lovely Cuttlefish safely on the deck. It wasn’t until 1pm, after Anna and Danny had gone and two dropped takes later that I had another squid on; this one stayed on and was kindly netted for me by the guy in the next bay. His services were required shortly after when yet another squid was on. This one made it all the way to the net before slipping off at the last second.

There was no more action for me after this but at around 3pm, a local angler of many years, ‘Farmer George’ landed a good sized squid after he had settled in my bay. By 4pm I had had enough for the day, and as I was working that evening, I had to leave – pleased with the result but annoyed at the missed opportunities. With inclement weather forecast for the next few days, here’s hoping that by the time the squid competition comes around next week, the conditions calm and clear out, otherwise it means postponement.