I haven’t had a session down at Brighton Marina for a while, so I thought I’d take advantage of the fine weather and calm seas yesterday evening to have a crack at some bassing with in-close big mackerel baits, plus a bit of general scratching with worm baits.

I arrived on the East arm at around 7pm and walked out to a free space at bay 36. Conditions were no wind, a flat calm sea and a bright sun. The plan was to snag out a few mackerel on feathers for bait, before fishing in earnest – only one problem – the mackerel decided they weren’t going to play and despite my best efforts, there were to be none. On to plan B then – use the worm to get a few pout for bait (more on that later).

A couple of fishing pals, Danny and Mike joined me not long afterwards, which I should have known would be the kiss of death. They had planned ahead though and brought some ‘bait’ with them in the form of ‘orrible, minging, poisonous mush; otherwise known as supermarket ‘fresh’ mackerel. Honestly, I’ve seen better conditioned fish in the bottom of a bin that’s been run over and set alight. 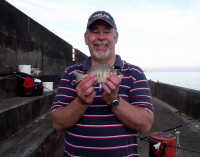 Not being able to get any proper fresh mackerel and with no signs of them even being in the same sea as us, I baited my feathers with small sections of worm and dropped it over the side to temp some small pout. In this exercise, I only managed to catch small bream (Pictured) and for the life of me, I could not get a pout – silly really as normally they are a bloody bait robbing nuisance. Anyway, at least the bream was another one on my species list for the year. 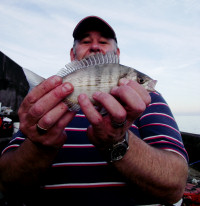 In the meantime, my other rod had been setup with a size 4 two hook sole rig (hoping for a sole once darkness fell) baited with worm and lobbed out – maybe I could get a pout on that. Even that didn’t work, as the first fish on that rig was a small thornback ray, followed by another small bream – it wasn’t looking good on the bass bait front. The second picture isn’t another bream – it’s the same as the first but artistically photographed by Danny to make it look bigger (I don’t think it worked).

I later managed more bream, another small ray and a small flounder but I reckon the pout had hitched a lift with the mackerel and gone to wherever they went. So then, while I was busy breaming, the boys were busy blanking with their poisonous offerings.

They packed up around midnight (lightweights) to head off home. Kindly (I think), they left me with a bag containing the remains of their toxic and by now dried out yet still slimy fish offal. Having examined it in the style of CSI Grissom and deciding not to bait up with it, I put paid to my chances of catching anything decent by lobbing the bag of offending shite over the side (not the bag though, obviously).

I stuck it until just after the 2.30am high water but only managed another couple of bream in that time. Although the target species (all three) weren’t forthcoming, it was a lovely evening to be out and with some good company, a great time was had.