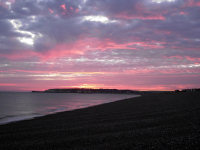 I was going to leave off fishing for a while to give the old back a rest but with the wind having swung around more Northerly and a flat calm sea, I couldn’t resist going out again last night for a spot of live-baiting at Seaford beach. I got there during the last of the daylight at just on low water and got everything set up.

The sea was flat calm, gin clear and no evidence of sea salad and noodles, so all in all looking too bad; no good really for static big baits but good for live-baiting. The wind was a just a gusty breeze from the North West which rippled the surface and whipped the cloud cover above along ata fair rate.

The plan was to have the bass rod ready and cast out with a gripper settled in and all ready to have the live-bait sent down on a slider. So with that done, I decided to hoof a worm bait out on a size 4, two hook flapper to see if anything was about yet. This could have ended in an embarrassingly inept disaster. As the lead was flying out, I saw that the line level on the ABU 6500 Sport Mag was getting dangerously low, so I slammed my thumb on the spool – just in time, there were only a few turns of line left! I’d forgotten that I’d recently begun stripping the reel but had stopped part way through. Now I don’t know why but for some strange reason, only known to those who inhabit my brain, I had tied a new shock leader on as normal. To think that the first cast and I could have spooled myself. It proves a point though – I can be a real tosser sometimes. 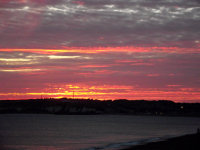 Anyway, with some line now back on the reel, the worm bait out all and the rest of the gear ready, I sat and had a coffee and generally chilled out. I managed to get a couple of pictures of the sunset over Newhaven which will join all the other ‘Sunset over Newhaven’ pictures I’ve taken. One of the drawbacks of being in Seaford, is that the only sunsets you get are in that direction; result? – they all look the same, apart from variation in the colours.

I digress – back on topic, once darkness fell, the pout came out to play and it wasn’t long before I had a few in the bucket. The first of the pout was promptly sent on its way on a slider and hopefully to tempt a bass.

Now, I hoped that some decent sole would hit the worm before any more pout and whiting got it. A bite! Leave it, let it develop, we know that sole need some time to get that worm down in that small mouth…wait, hands in pocket… something’s there (on the bait – not in my pocket)… just a bit longer…. pull down… lift rod – yup there’s summat there. Bring it in and instead of the anticipated flapping, muscular sole.. what do I have? A ball of slimy snot, a mangled trace and a bloody eel that’s what I’ve got. Hooray, I just love untangling stuff like this, it’s so satisfying – oh sod it, cut the line, cut the eel free and put on a new rig – it’s so much easier.

The next bit action had no fish involvement whatsoever, unless any of the people involved were called ‘Mr Fish’. It was about half midnight when I was aware of a loud crackling noise a couple of hundred yards to the East of me along Marina Parade. I looked over and could see something was well alight near to one of the shelters, I wasn’t too sure whether it was a car, rubbish fire or the shelter itself. I could also see two hooded oiks hanging around it. I phoned for the fire brigade and gave the information to the operator who said they would be along shortly. Meanwhile, the two oiks were dragging something from nearby – couldn’t see what it was and were taking it towards the fire. I then phoned for the police who arrived some time later.

Fire brigade turned up and extinguished whatever it was, while the two oiks watched for a while before skulking off into the garden area next to Hardwicke house. I updated the police who arrived, had a look around and buggered off, the brigade then went, so it was back to me just sitting on the beach not catching fish.

It wasn’t too long before I decided that enough was enough and it wasn’t going to be a fishy night. I’d given it until the hour or so after high water and there hadn’t been so much as a twitch from the live-bait to indicate a predator nearby. As said though, at least there was no sea salad and noodles that have been plaguing the fishing of late.

No fishing for the next few days but hopefully, the next session will be at least a bit more fishy.