On Monday 16th myself and a few blokes from WSF decided to have a session at Brighton Marina. The target was smooth Hound (aka smoothie or smut). There have been a few small ones caught recently with the beginning of the annual moult of the Spider crab. It was hoped that the larger ones were not far off, coming in to feed on the soft, recently moulted/peeled crab. Not renowned for large smoothies, the marina does produce a few reasonable ones at times.

I arrived at around 6.45pm and while walking out on the arm, I spotted Fishyrob fishing in one of the lower bays using live prawn on a float rig. After a brief chat, I continued along and saw that there were a few already fishing along the ‘bend’ and filling the bays. I could have wondered all the way out on the arm for more room but wanted to stay in the lower mid section as we had decided earlier, for the best chance of a smoothie. I finally found a vacant spot and settled myself in bay 22.

I started off with a bit feathering for mackerel to top up the bait situation and managed a few. There didn’t seem to be that many around compared with other days but that is the way at the marina – some days loads, other days scarce.

As the evening wore on, I set up my rods ready for darkness to fall. One was set up with running ledger DVice with peeler crab or hermit crab on a 3/0 hook and fished at varying distances. The other rod was set up again with a running ledger but with a 4/0 pennel rig and alternating between whole calamari and mackerel fillet as bait.

The other lads turned up and after introductions and a quick chat, unpacked and set up their gear to begin fishing. We filled a few adjacent bays which apart from making for a better atmosphere and almost competition conditions, it is better as we were all in one place. The fishing was a bit on the quiet side with not even Pout to break the monotony. At least it gave us a chance to have a natter, as some had never met before and were just known through the WSF forums.

We had a brief period of activity where a few smoothies were landed which although not large, were in the 3-4lbs bracket. The spell was short-lived and as quickly as it started, it went quiet again and no further smoothies were caught. 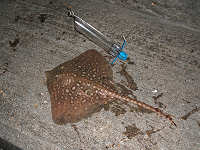 By the end of the evening, for my efforts, I was rewarded with one pout but determined to have a least one half reasonable fish, I stayed after everyone else had gone. Shortly after Rob left, I brought in a small thornback ray which went for the peeler crab on the DVice rig. I really like rays, there’s just something about them that appeals to me. It’s just a shame that for some reason, this venue and Seaford produce numerous small rays but never anything of a decent size. Quite why this is, I don’t know but maybe I should do some research into the matter and try and find out why. I should make the effort to travel to better ray spots but there is nowhere relatively near for that produces decent rays in larger numbers apart from maybe Hampshire. Widewater at Shoreham does throw them up from time to time but not enough to go there specifically for them. 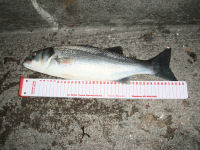 Anyway, enough of the muttering, the next piece of action was shortly after this. My second rod lurched over sharply and the ratchet screamed loudly as something below grabbed the whole small mackerel fillet I had lobbed over the side. I knew it wouldn’t be a Smoothie and that it was more likely to be a bass. It gave a very spirited fight and I did think it was going to be somewhat larger than the 2Â½ lb specimen that came aboard. However it was another fish under the belt and made up for the direness of earlier. I had intended to pack up around this time but opted to stay a just while longer (how many times have we done that) to see what else I could bag. I should have gone with my earlier decision as no more fish showed and it went back to unfishy. This being the case, I decided to jack it in at 3am.

Although there were no Smoothies in quantity, it was a nice little meet and good to see a few more faces from the WSF forums.