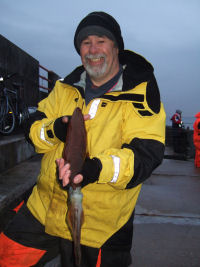 The third ‘All England squid Fishing Championship‘  was held yesterday on the East arm of Brighton Marina with a good turnout of 48 competitors who raised £240 for the RNLI. In comparison with last year, when the competition was held in warm sunshine and I got sunburn, the start for this year was somewhat different – cold NNE breeze (very light) and light rain. Last year was ‘T’ shirts, this year was waterproofs and thermal wear. It has to be said though, that later on, the breeze was virtually zero and the slight  rain was patchy to zero, so not that horrendous.

Before going to the appointed meeting place, I popped into ‘The Tackle Box for a few bits ‘n’ pieces. Being someone with a limited memory, I had written ‘Bait Elastic’ on the back of my hand, it was unfortunate that I had omitted to write or add ‘Bait’ to the list, as that vital item was sitting forgotten at home in the fridge!

Everyone met up at the café on the East arm at 4pm where entrance money (towards RNLI charity) was handed over and in return, entrants were given a Tronix squid jig in the colour of their choice, I opted for a very fetching green. We drew numbered score cards that denoted the order in which contestants walked off for the start – I drew no.10 which wasn’t too bad. Soon we were off and walking to wherever we could get a space. Another WSF member, ‘mr codling’ and his cousin ‘Ant ‘ were just before me but we decided on fishing together so that witnessing and card signing would be easier. We eventually found some vacant space at bays 41-43 and started to set up. We were also joined by Mr and Mrs Wee Haggis and their usual large amount of kit.

Official kick off  was 5pm and at that time, many jigs were cast out in expectancy and 48 pairs of eyes stared at floats, waiting for them to slide under the surface. In our little merry band, Mrs Haggis was the first to strike within the first 10 minutes and after I wielded the net, her first ever squid was safely on the deck. It was quickly dispatched, measured at 37cm and put in the cool bag. Things were looking good and it promised to be fruitful session.

After this first bit of activity, I’m afraid I got  lost  in it all and couldn’t tell at what happened at what time but my turn was next when I had a reasonable sized Cuttlefish on the line which escaped during the attempts to net the thing – my first chance blown! It wasn’t until quite a way into the session that my next chance came when I hook a squid, which got to the surface and then let go. I immediately let the jig back down and luckily, the squid grabbed it again and this time was safely netted by wee haggis. After measuring the critter (37cm) and getting my card signed, it was back for attempts at more; in my case no more, as that was it for me – not even a sniff at another squid or cuttlefish.

For the rest of the time, we saw no more action apart from wee haggis getting a mackerel on his jig and Ant managing to bring in a black bream on his…. weird! I did get to enjoy some very nice coffee from Mrs Haggis’ ‘kitchen’ which was certainly better than what I had in my flask. Before long, it was 10pm – the finish of the competition and the walk back to the meeting point, totting up of points and the giving out of the awards and prizes. Sadly, I got nowt for my efforts apart from a tasty squid for dinner and a great time in good company – just hope next year is a bit warmer and drier.

Many thanks to Fishyrob and George ‘Tronix’ for organising the event, the sponsors and dealers who donated kit for prizes along with the Brighton restaurant FishyFishy

Competition results can be viewed here. Hopefully, I’ll have some photos to add soon.