Due to continuing problems with my back, I haven’t been out on the beach for a long while (apart from a couple of mini sessions), so it was with great anticipation, that I headed out to Seaford beach last night.

I got to my chosen spot at around 7.45pm, and was going to fish up and over the 10.30pm high water and maybe a couple of hours down. There was a bit of a breeze coming in from the West with some nice breakers and lots of action in the water. Spurred on by recent reports of some nice bass coming up along the South coast, I went for the all or nothing approach and opted to fish one rod with big baits close in. This also meant I didn’t have to do any twist, turn and wack it casting.

I set up the one rod with a long link running ledger, 6/0 – 4/0 pennel baited with whole squid and chucked it out into the turbulent water. It wasn’t long before the first bite came, a few sharp taps and…. nothing. The bait came back shredded – ahh that’ll be whiting then surprise, surprise. Re-baited and chucked it back out, tap, rattle and shredded bait again. I resisted the temptation to scaled things down and stuck with the big bait in the hope of something decent. This theme went on for a while before the first fish was beached… and yes, it was a whiting, skinny thing that had no business taking the size of bait it had done. 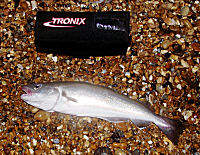 Apart from that, there was no action, only the continual bait shredding which was becoming a bit tiresome. Almost two hours after high water, I had the first ‘proper’ bite, a short, sharp pull and slack line. I took in the slack and struck; there was a fish but no fight, just some weight and sharp tugging. I brought the fish out onto the shingle – whiting but a nice plump table sized one that went 35cm and a pound on the nose. Whiting are a real pain the arse when they’re just the small ‘pins’ but nice ones like this make lovely eating and I’m happy to catch them all night.

As the tide dropped away, I was getting more bites than ever – all whiting but nice decent sized ones and all caught in close, at no more than fifty yards out. By the time I packed up at around 1.30, I had half a dozen plump keepers for next days dinner. So, no big fish but an enjoyable evening with some decent table fish for my efforts