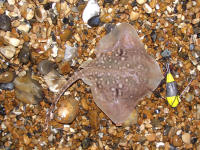 Due to crap weather mixed with work, my crap back and other commitments, it’s been ages since I’ve been out on the beaches, so on Friday night, I went out to Seaford beach to fish the tide up from the 8pm low water.

Once on the beach, I checked out the conditions which didn’t look too favourable. The sea was flat apart from small wavelets on the shore line, wind wasn’t doing much either. Water was clear with some colour in it.

Two rods deployed, one with a size 4 sole rig baited with black lugworm and the other with long link running ledger, terminating in a 6/0 baited with squid (I did want fresh mackerel but was busy yesterday and couldn’t get any).

Two cups of muddy coffee and two hours passed by before I got my first bite of the night – a couple of sharp taps followed by slight trembling on the rod tip. On retrieval, the culprit was identified as a small (and I mean small) thornback ray (pictured). Not exactly what I was looking for but at least it saved a potential blank and it’s another one crossed off the species list.

Next up was a small bootlace/snotty eel which luckily was only lip hooked, so I could shake the bloody thing off and release it before too much damage was done to the rig.

A short time later, I had a terrific pull down on the worm rod and once hooked, it seemed like a bit of weight on the end. As it reached the waters edge, any hopes I had of a decent flattie were completely shattered when it turned out to be a whiting – a decent sized whiting I’ll grant you but still a bloody whiting, in July? At this rate, it would seem we are going to be plagued by a resident, all year round whiting fest – oh deep joy!!

Anyway, I gave it another hour so before calling it a night with nowt else showing up, not even the slightest of twitches on the bass rod. My mojo is currently spiraling downwards but to be fair, I haven’t put in as many hours as I normally would due to other things needing my attention. Hopefully once all is settled, I’ll be back out with mucho gusto!