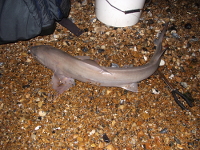 Recently, having given myself a good kick up the arse, I’ve started to get the motivation back to get out on that beach and get some fishing time in. Up until now, I’ve done a couple of makkie sessions with Alex and the latest one got that old ‘shingle itch’ going again. 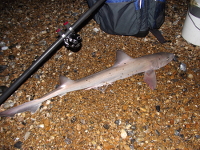 Now yesterday was not the best of days to kick off the re-kindled career but needs must. Although the tides were crap, we’d had a bit of a good blow overnight and the earlier part of the day, so I reckoned on a decent amount of movement in the water. The plan was to get out onto the beach for about 11pm and fish the first few hours of the flood to see what, if anything was about.

Conditions were ok, the wind had dropped and had shifted Northerly which was flattening the surface out, although there was still a residual swell which was making a few breakers.

Armed with a box of squid, I settled in familiar spot on Seaford beach and rigged up with a long link running ledger ending in a 6/0 loaded with whole squid. This was gently swung out into the white water (what little there was) and the wait began. From the off, weed was a problem close in, loads of fine stuff that began building up on the line, along with larger clumps of wrack. 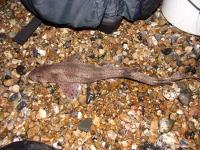 Nothing happened over low water apart from the weed and I had to wait until an hour into the flood when there was an almighty pull down that took me by surprise and almost had the rod out of my hand. Proper fish on!! It went well and I though “First fish of the year and it’s gonna be a decent bass”. Well, this thing went all over the bloody place and as it neared the breaking water, I was thinking, “Please don’t come off in the surf, just don’t”. Anyway, I got things all timed nicely and as a largish wave receded, I could see the glint of something on the shingle, not the expected bass but a bloody smut!

I know I shouldn’t have been disappointed to have this as my first fish of the year, as it would usually be a bloody whiting, rockling or similar unworthiness but I was a tad peeved that it wasn’t Mr. Bass. Anyhow, it was a lovely looking fish which I guesstimate to have been around 5lbs or thereabout. Unhooked, quick couple of pics and back it went.

Nothing else came in the next two hours apart from the odd bits of weed and paper, so I was happy to see the rod tip bounce a few times – another fish on and beached, this time time another dog variety in the shape of a skinny LSD. Again, unhooked, photo’d and back in.

By 3.30, the last of my squid had gone and it was time to make the long journey home (hehe!!). Summing up, I was pretty pleased with the first ‘proper’ fishing trip of the year. Two species, no crap and an enjoyable evening back where I belong.