Yet again I was at Seaford beach last night, a place that seems to be in danger of becoming my main home from the amount of time I’m spending there. Anyway, I arranged to meet Nigel, a fishing fanatic and member of another web forum I belong to, South Devon Fishing, who was up on a visit from sunny Devon. We planned to the flood tide up to and over high water in an attempt to hit some decent bass. 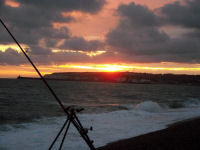 Things looked very promising, a South Westerly breeze still blowing but nowhere near as strong as the last few days. There was still some swell being stirred up by the wind and at least there were waves breaking on to the beach, although these were weak compared to the crashing dumps of a couple of days ago. The weed seemed to have dispersed a bit and although still there, it certainly wasn’t as bad as previous nights and was certainly more fishable. The sky was cloudy with the sun shining through and giving a lovely display in the sunset. 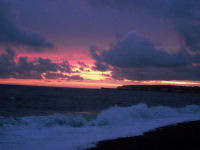 I set up the bass rod – you know the rig by now – long link running ledger and 6/0 – 4/0 pennel baited with whole squid. All baits were soon in the water and we waited for the tell-tale signs of bassy activity; unfortunately, this turned out to be a long wait, as the fish seemed unaware that they were allowed to feed. To be honest, I really wasn’t expecting much until at least it was dark and probably not until nearer high water. My low tide success has come when it coincides with darkness and has never produced during daylight.

As I wasn’t being hampered with the filthy business of dealing with fish, I took the opportunity to get a few shots of the sun setting over Newhaven. I’ve put two here above but the rest (all three of them) are in my Flickr collection, viewable through the ‘Photos’ section of the site.

We were later joined by fellow fishy person, Clive, who had his bait in the water pretty rapidly and soon, it could almost have been a scene from ‘Last of the summer wine‘ with the three of us firmly ensconced in our seats, waiting and watching.

It took up until around an hour after high water before the first fish of the night hit the beach and that was a school bass that fell to Nigel’s squid bait. I had to wait for another half an hour before it was my turn for the action, when I managed a bass in the 2lb region; not a big fish but it was the target for the evening and it saved me from the dreaded blank – a result which sadly fell to Clive. 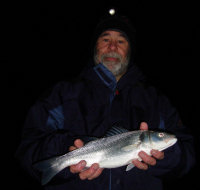 He tells me he’s never done well at Seaford, so at least his consistency is good, although he is a demon when it comes to fishing Brighton beach

Nigel packed up at around 2am as he had to be in London this morning, while a disappointed and disgruntled Clive and I stuck it out until about 2.30 before calling it a night. With a rapidly dropping tide and a flat calm sea in a flat calm, windless night., it became obvious that there was going to be no further fishy action in this session.