Now, normally I would write up this report and insert pictures in a chronolgical order but to be honest, I couldn’t say with 100% certainty, which fish came from which wreck and at which time. Plus too many pictues and not enough text make it all look a bit messy, so to keep things tidy and to stop me blathering about on about anything and everything, I’ll give a bit of an outline and put up some nice pictures. Photos are curtesy of the resident photographer for the day, Mr Terry Hill.

Following my trip out on Friday, I had the opportunity to again set out to sea on Sunday – this time, aboard a private boat, ‘Sea Mistress’ skippered out of Newhaven by WSF member Terry Hill. We met up at about 8am at Newhaven and after a bacon butty and coffee at The Captain’s Table, Terry arranged for his boat to be trailered from the boat yard, down the slipway and into the water. We set about stowing our gear aboard, while Terry fuelled her up and did other stuff. We were joined by fellow forum member, Dave and once everything was ship-shape, we set off out of the harbour.

Terry opened up Sea Mistress once we were clear of the harbour confines and headed off to some wrecks in search of cod and pollack. Like Friday, the sea was mirror calm and with no hint of a breeze to ruffle the surface, we made good time. It wasn’t too long before we were over the first wreck and Terry set up the drift. 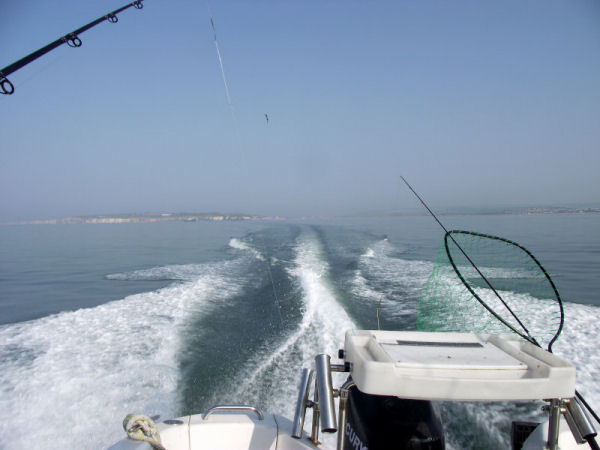 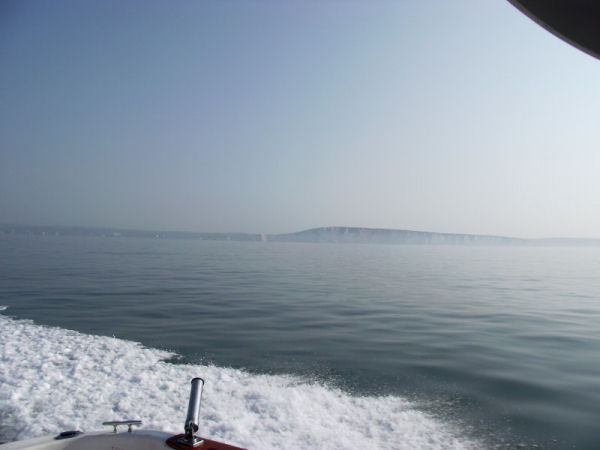 Tactics were the same – long flowing traces with artificial lures worked close to and over the wreck. Although the water was clear, it was evident that there was already a lot of the dreaded ‘May rot’ in the water which could have an effect on the fishing. Terry was the first into a fish and nice bass was soon aboard. Expectations were high and we were buoyed up by such an early result. Unfortunately, that was the only fish on that wreck, so after a few fruitless drifts, we were off to the next mark, a few more miles out. 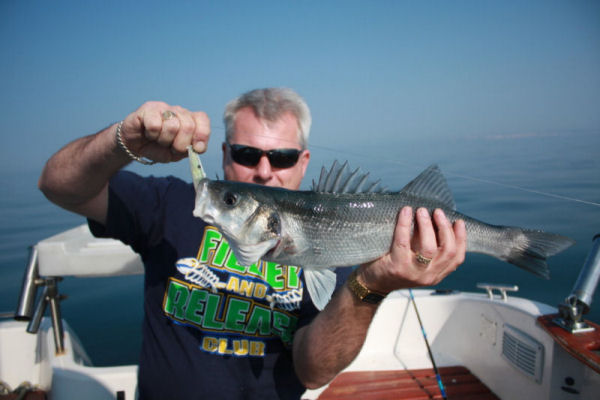 Fishing was slow over the next couple of wrecks but Dave managed a couple of reasonable pollack, while I seemed to be attracting large pout for my efforts. 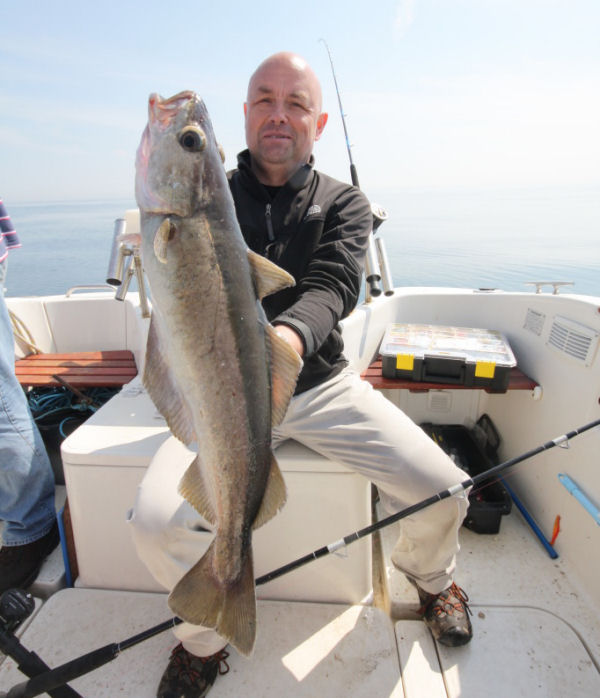 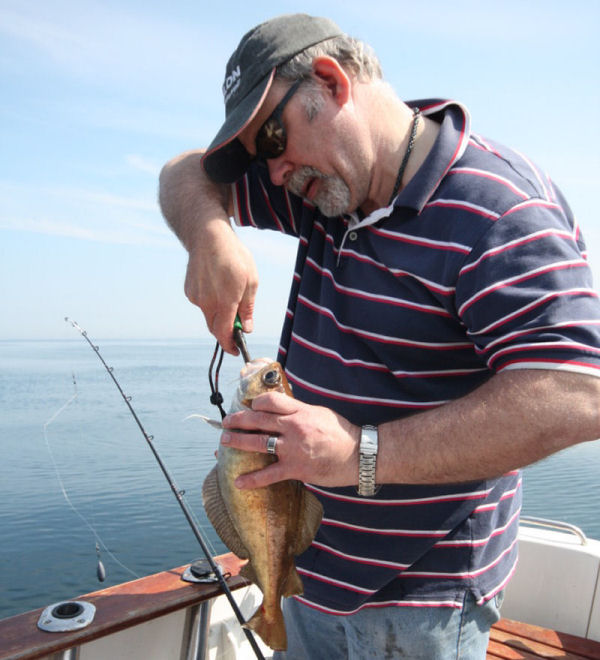 Terry started up the engine again and we were off, this time to a wreck some sixteen miles out. Progress was good, with a steady cruising speed only interupted by the wakes of occasional passing larger vessels. First couple of drifts, I was getting small snatches at my lure but couldn’t get anything to take it fully. It wasn’t long though before I boated my first ‘proper’ fish, a small but welcome pollack. 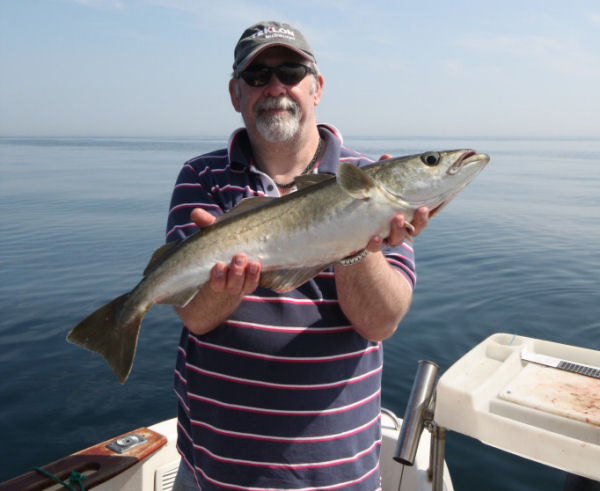 …and then not long afterwards, Terry got the first of the target fish of the day, a tidy codling. 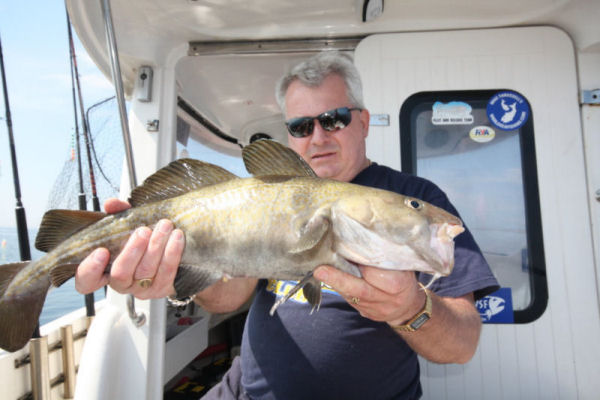 With renewed vigour, we continued to work the lures but to no effect, apart from more pollack for me and a beautiful little tub gurnard for Dave. 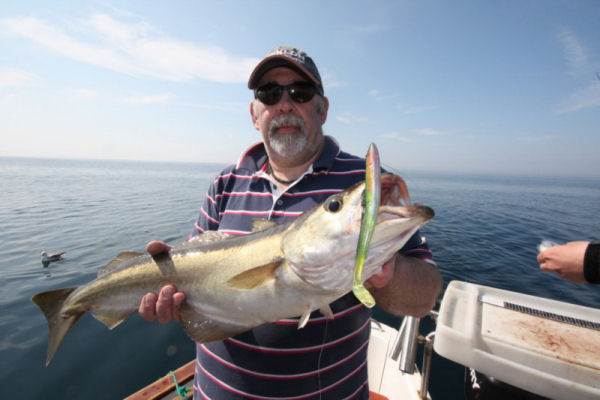 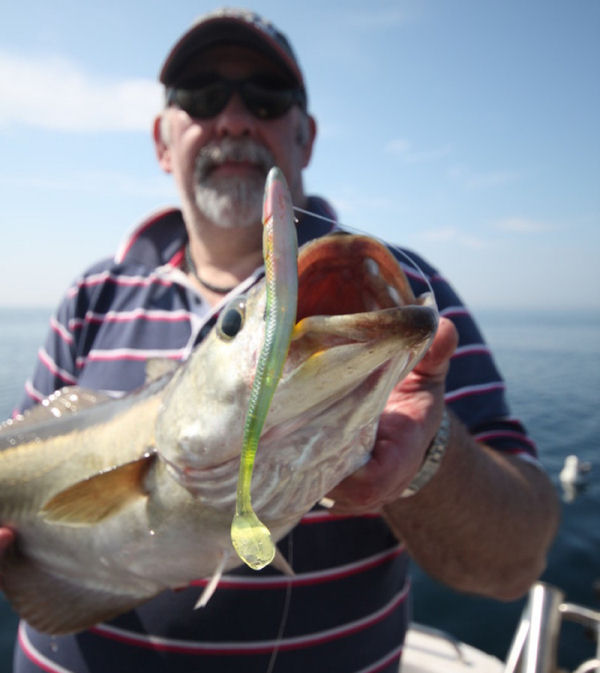 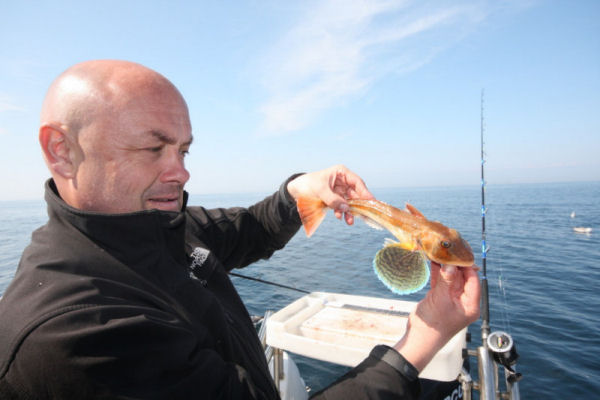 I then boated a whiting of all things – all this way out and I still get bloody whiting. At least it was of a decent size anyway. 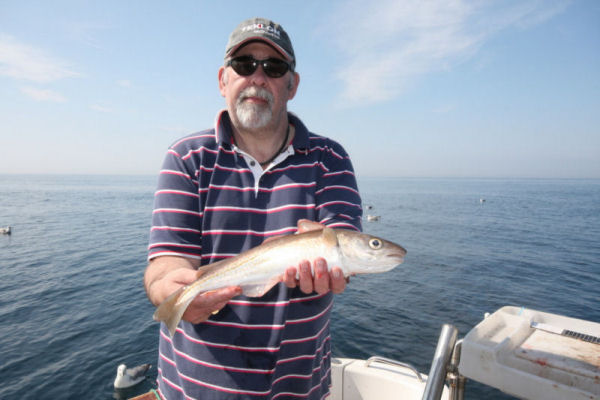 Another wreck later and although we still weren’t getting large numbers of fish, we sort of ticked over with bits and pieces. Dave then had his first bass of the session after a short tussle. 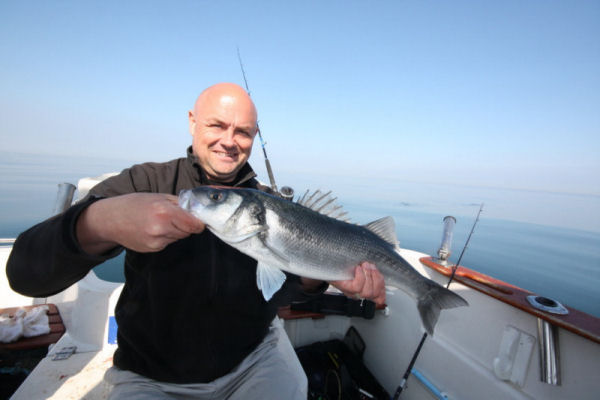 …and he followed this up a bit later with the biggest pollack of the day at a shade under the ten pound mark. 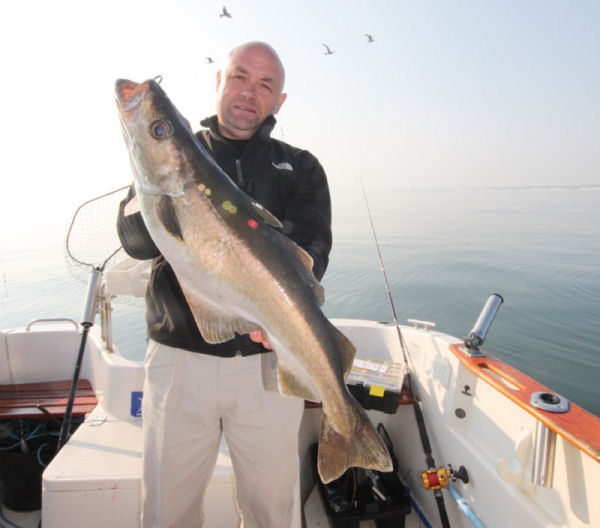 While he was doing the pollack – so to speak, I had my first codling of the day but unfortunately didn’t get a picture of it.

We fished on for a bit and did some wrecks on our way back to port but as the tide slackened off, the fishing died with it. We decided on some ground fishing on the shoals off Beachy Head, so swapped our artificials for ragworm fished on long traces with plenty of beads and colour, in the hope of attracting a plaice or two. Alas, this wasn’t to be the case and all we managed to attract were pin whiting and pout.

So it was with an Easterly breeze picking up and chopping the surface, we headed back to port. I attempted to fillet my catch on the return but this proved a little risky, so after one fish and deciding I’d like to go home with the same amount of fingers as I had when I left, I opted to fillet the rest at home.

Back at port, we unpacked the boat and did other nautical things with ropes and pipes before collecting up our assorted bits and pieces and going our seperate ways. A big thanks again to Terry for the day out and putting us on the fish.

Here’s the stuff I didn’t get around to preparing on the boat and is awaiting the filleting knife. 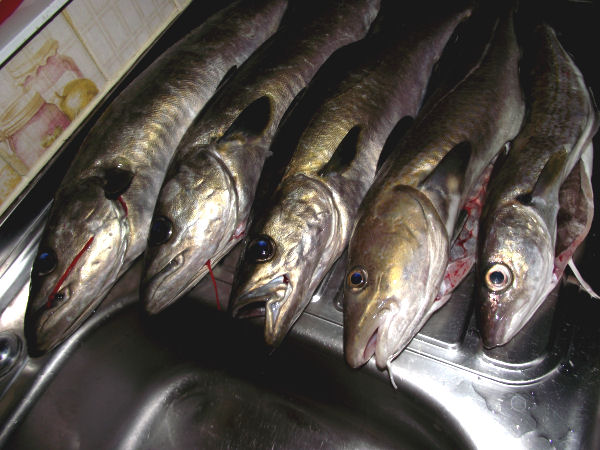