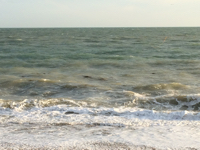 Looking at the conditions yesterday, it tempted me into hitting the shingle once again, in search of the silver spikey one. The plan was to get setup at low water and fish the tide up and over high water, which was a little after 1am. One rod, one bait and hopefully target achieved, the prospects looked promising.

I was on the shingle bang on low water and although the sea conditions looked great with a good amount of surf churned up by the gusting South Westerly breeze. What I didn’t like was the amount of weed in the water, big clumps of the stuff just where I wanted my bait to be. Not to be deterred, I set up with the familiar long link running ledger, ending with a 6/0 hook loaded with a whole squid. I sent this out into the turbulent water and settled in for the wait. 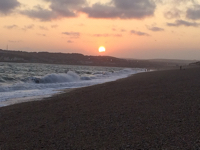 From the off, this was a battle of the weed. No more than a minute or two after casting a bait out, the line looked like granny’s washing line, lumps of weed clinging on and dragging everything down and along in the current. I spent more time bringing in clumps of this shit and clearing it than I did actually fishing. There was the ‘orrible clingy muck that’s like wet cotton wool and then that nasty, slimy ‘Seaford spaghetti’ type, stringy stuff. Thankfully it did ease off throughout the evening but was always there. At least there was a gorgeous sunset to cheer things up in this weed festooned, fish-less period. 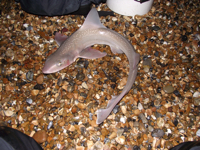 First fish didn’t arrive until the sun had gone and darkness had fallen. At around 9.45 I had a half arsed attempt at a pull down bite which resulted in a very brief tussle in the waves and weed followed by a smoothound pup of around the 3lbs mark up on the beach. Not a massive fish but at least it was a fish – another on the plus side was that the dreaded blank had been avoided. A quick photo and then the unavoidable lower leg soaking while putting it back.

It was not long after this that I had a visit from one of the local beach foxes that was taking an interest in my bait bucket. Didn’t last long though, it obviously thought there were better offerings further along, as it scuttled off pronto. 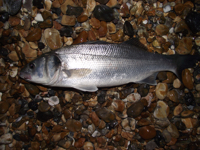 Another two hours of line clearing and general annoyance followed before I felt a distinct tapping through the rod, I lifted into it and…..nothing… arse!! I left the bait out and as quick as you like, more tapping and this time it was fish on. Through the waves and up the beach it came, it nicely proportioned school bass of about 1½lbs. Not big but a bass – target species caught. Quick photo shot and then more lower leg wetting while releasing it.

Sadly, that was the last fish of the night, even the ‘golden’ period following high water produced nothing. So surprisingly, it was a very quiet session in what should have been very productive conditions. It’s often like that though – it promises everything but in fact delivers very little.

Ah well, I seem to be back in the swing of things now and I’m looking forward to the next stint, wherever that may be.