Having been given an order for some mackerel by the guys at work, I took the opportunity of a break in the weather to head off to Brighton Marina nice and early on Wednesday morning to bag a few. I arrived on the east arm at about 6.30 am just before high water, to find it nice and calm and the sun shining and as I walked along the top deck, I could hear the promising sound of mackerel boiling on the surface somewhere below.

I plonked down in about bay 18, I think it was, set up the feathering rod and began working the lures close in. Now the water was murky but mackerel were feeding – just not in the bit I was in! In fact it wasn’t until gone 7am and the top of the tide before they came in strong and then it was non-stop, they were everywhere, patches appearing all along the wall and further out too. Bloody gulls didn’t know which way to turn, flitting between the different shoals. 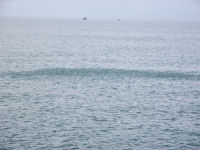 I took a bit of a break to try and get some photos but as is always – turn the camera one way and they show in the opposite direction. Anyway, I managed a few shots and a bit of video (Excuse the quality – haven’t done this for a while). If you enlarge the first picture (click on it), you can clearly see individual fish withing the shoal. 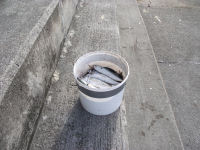 Back to the rod but this time the light one and float gear; had some great fun hoiking them out one at a time instead of strings. Wasn’t long before I had a bucket full and plenty for the guys, the in-laws, friends and ourselves. If I was of a mind, I could easily have stayed and filled more buckets but just can’t see the point – having said that, I need to get down again soon and get some for the bait freezer which is empty!

Even as I left at about 10am, they were still shoaling in patches all along the wall, a great site to see. The thing that did surprise me was that apart from a couple of blokes fishing further round the bend, I was the only one there enjoying the sun and fish.

Looks like weather is breaking soon, so hopefully back to the beach during the evenings for some action.