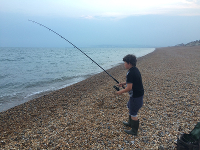 Having not ventured out onto the shingle in quite some time, I thought it time to get back out there and start hitting the fish again. I knew Alex was itching to get out there too, so last Friday, we did a very short evening stint around high water to see what we could muster.

I set Alex up with a set of small feathers and got him working them right and it wasn’t long before he was into his first mackerel of the year, which for some strange reason known only to himself, he called ‘Kevin’. This was followed up with a small, pretty little tub gurnard which had found the lures to be all too enticing. 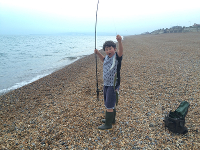 We didn’t have to wait too long before the kid was in again, this time with a trio of mackerel, which he also called ‘Kevin’. Just when we thought we might get a decent number for BBQ’s and for freezing, the fish decided otherwise and the session went absolutely dead, with no more getting beached.

Anyway, we left the beach content with four Kevins in the bucket, a smile on our faces and much talk of returning in the near future to have a few more in. With the summer holidays coming up very soon, we’re both keen to do some late evening/night sessions, Alex wants to get his first bass and I’m still chasing the elusive double figure Billy.

I realise now, just how much I’ve missed being out there and I am determined to make it a great second half to the year and start chasing some quality fish.