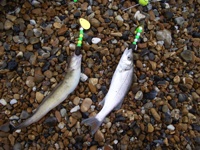 To pop my 2013 cherry, I hit the shingle at Seaford last week for a rare (for me) daytime session. Was on the beach and setup by about 9.30am on a rising tide. Water was dead calm with a hint of colour. Breeze was from behind the beach and the sky overcast. High water was going to be around 1pm.

Decided to use just the one rod, wishbone rig with blinged hook lengths and baited with lug and squid tipping.

The only thing that was going to ruin the day were the shingle shifters re doing the beach profile as part of the sea defences annual maintenance. Big trucks up and down the beach delivering the shingle and the bulldozers doing the profiling. Got a bit too close at one point and almost engulfed the guy fishing to my left!

First rod tip nodding of the day resulted in a double shot of fakking rockling and the smallest bass I have ever seen on the beach. 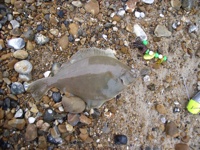 Next up was a single dab about quarter of an hour later. From then on, it was small dabs with a handful of rockling. I was hoping for plaice and maybe a flounder for the species hunt but it wasn’t to be.

By about 12, I was done in, my back was screaming and I had to pack it in. Shame really ‘cos it was not long before high water and I’m sure, I’d have had better results then. Anyhoo, it was great to be back out again, even for a short while and started off this years species hunt with three in the bag.