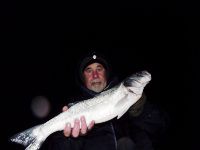 Over the last couple of weeks, I’ve had a two or three sessions at Seaford beach in the search for bass. As I’ve had little success (except for a few doggies), there really hasn’t been much to write about. I tried at the venue the other day, but the on shore breeze was pushing loads of weed in close and after a few hours of pulling the crap off my gear, I jacked it in.

Last night, I was drawn to the beach yet again and as I’d not had a chance to have a look beforehand and considering the high wind the day before, I took a sturdier rod than I would normally use, as I was expecting at the very least, a heavy swell and rafts of weed. How wrong could I be! A gentle swell in the otherwise flat, slightly coloured sea – and no weed! I had arrived about two hours before 10pm low water and the plan was to fish over the low and maybe a few hours of the flood tide.

I set up just opposite West View, a simple long link running ledger with a 6/0 – 4/0 combination pennel baited with whole squid. This was lobbed out into the gentle swell and the wait began.

Two guys popped over for a chat – if you’re reading this – nice to meet you Sam and Steve. It was just going into darkness when Steve pointed out that there had been a bite on my rod. Once brought in, it turned out to be the usual doggie. After the guys had left (hope you had luck wherever you went), I settled in, concentrating on the rod.

The rain came in and although not heavy, it was enough to start getting everything soaking. Good job, I’d packed the waterproofs; I’d almost left them behind, thinking I wouldn’t need them.

Another doggie hit the beach just before low water but apart from that, there had been little to stop the feeling of pessimism, that was starting to creep in. I started to think about packing in but decided to sit out my plan and at least fish an hour or so after low water.

Half an hour after low, the was a series of trembles on the rod tip before it was plucked down and I was soon into a fish. I wished it had been on the bass rod instead of the heavy gun I was using but anyway, I suppose it didn’t really matter. A short tussle in the small swell and the prize was on the shingle, my fist bass of 2012. A lovely conditioned fish, it measured in at 60cm and 5lbs 2oz on my berkley scales.

I soon had a bait back in more or less the same area, about 15-20 yards out. Apart from another doggie that took the bait, there was no further action and come midnight, enough was enough. My back was killing me, everything was soaking and I longed for the comfort of home.